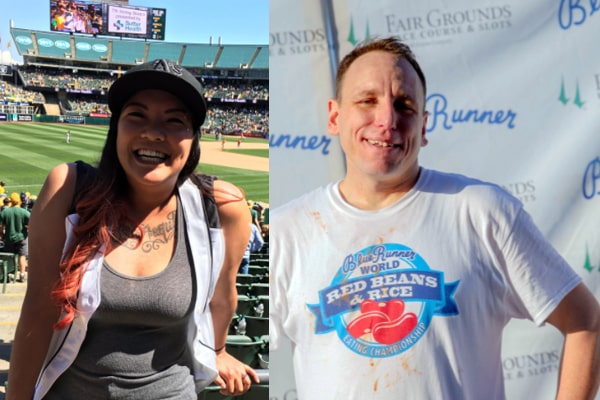 Jaws, aka Joseph Christian Chestnut, is an American competitive eater who is ranked one in the world by Major League Eating. However, when it comes to relationships, the Nathan’s Hot Dog Eating Contest winner has had little luck.

Despite the fact that Chestnut is well-known among ladies, he was enamored by Leslie Ricasa. As a result, here’s all you need to know about Joey Chestnut’s ex-fiancee and her location. Continue reading to find out how Joey munched his way through a break-up.

Joseph Chestnut is a well-known competitive eater who was once in love with Neslie Ricasa. Yes, Neslie rose to popularity as Joey Chestnut’s girlfriend, but she has always kept her personal life private.

Furthermore, Neslie is not active on social media, and her Instagram account has been inactive since 2015. Similarly, her Facebook page was last updated in August 2019. Ricasa is seen in one of her Instagram posts feeding a newborn tiger with a large smile on her face, almost like a proud mother.

Ricasa is a huge secret-keeper, but her Instagram clearly shows she’s a huge animal lover. Furthermore, her dog was often displayed on her social media. In fact, she once said that her dog wasn’t a speed demon like his daddy, Joey Chestnut, who is now her ex-partner.

Surprisingly, her current spouse, Drew Ely, is the only person she is friends with on Facebook

As previously stated, Joey Chestnut’s ex-girlfriend, Neslie, is married and may have appeared on Facebook in 2019 to update her relationship status.

Oh, Joey Chestnut’s ex-fiancee is married and has a child with her husband, Drew Ely. Although there isn’t much information regarding Neslie’s marital life, professional job, or present whereabouts, her Facebook page indicates that she married in 2019.

Also, Neslie Ricasa’s Facebook page reveals that the Ely couple began dating in 2017, while she first posted their photos on Instagram with the phrase “Besties.” Regardless of her leaking personal information, Neslie maintains complete seclusion and appears to have no desire to be seen in public.

But if you’ve been following Chestnut and his career triumphs, you’ll be aware of what happened in 2014. As a result, continue reading to find out what transpired between Joey and Neslie.

Joey Chestnut, the hot-dog-eating legend, ate 61 hot dogs in 10 minutes to win the Nathan’s Famous Fourth of July Hot Dog Eating Contest for the eighth time in a row.

Furthermore, prior to the hot dog eating challenge in 2014, the victorious Joey proposed to his former long-term partner, Neslie Ricasa. Surprisingly, she accepted the proposal, and the couple married. However, nothing more was heard from the couple after that. In fact, the three-year pair announced their divorce just weeks before their May 9 wedding date. Joey and Neslie have both moved on with their separate relationships as of now.

While Neslie has already married, her ex-husband has yet to walk down the aisle.

After all of the readings, if you’re still wondering if Joey and Neslie are married, let us answer it for you. No! Neslie Ricasa and Joey Chestnut are not married. They have, in fact, moved on with their lives and found their own pleasure. But what was the underlying reason behind the breakup?

Joey, the competitive eater, blamed their split on his rigorous touring schedule and travel. He also stated that he had been gone for a long time and that they had split up amicably.

Furthermore, Neslie’s ex-fiance was concerned that returning to the scene after the separation would be difficult, but he concentrated on winning instead. In addition to his statement, Joey appeared relieved not to have any distractions, confessing that the whole engagement situation had previously upset him.

Even after all of the comments circulated on the Internet, Joey Chestnut’s soon-to-be-wife at the time, Neslie, stayed mute and never discussed the separation. She still lives a low-key existence. As a result, we hope to hear more from her in the future.

Furthermore, Chestnut ate 76 hot dogs in the nationally broadcast competition, one more than he did in the previous year’s men’s record.

In an interview with ESPN, Chestnut stated that he felt happy following his victory. He went on to say that, even though he was uncomfortable, hearing everyone applaud him made him feel wonderful.