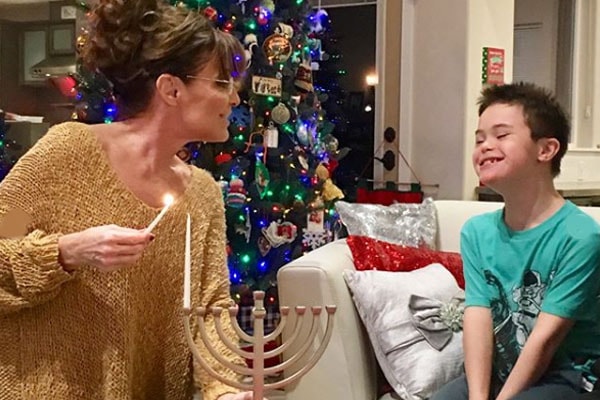 Trig Palin was born a month before his expected due date. Trig’s issue was discovered through early prenatal tests. After three days following Trig’s arrival, Sarah called a meeting on the natural gas pipeline, where she showed Trig to a few media and chatted about him. Sarah Palin confirmed that her son Trig Palin had Down syndrome at the meeting.

It’s a chromosomal defect-related hereditary condition. Sarah also stated that she and her husband Todd consider themselves fortunate because they have a large family.

Trig Palin, the youngest child of Sarah and Todd Palin, is in fourth grade. Trig continues to learn and receive an education despite having Down syndrome. Trig’s mother Sarah also gets a nice photo of her kid on his first day of fourth grade to make his school life unforgettable.

Has a particular fondness for dogs

Trig, like many other children, enjoys spending time with animals. And, based on his appearance, Trig is a dog lover. There are numerous images of Sarah Palin’s kid Trig Palin stroking and enjoying himself in the company of dogs.

People were outraged once when Sarah posted a video of Trig using their pet dog as a stepping stone to get to the sink. Despite the fact that the dog appeared unconcerned, many individuals were agitated.

Trig Palin Is A Subject Of Conspiracy Theory

There has been a lot of controversy concerning Trig Palin’s parentage. The biggest question is if Sarah Palin or her daughter Bristol Palin is the birth mother of Trig.

According to the former governor of Alaska Sarah Palin, Trig is Norse which means “brave victory” and “true.” And the name Paxson is a region in Alaska. Then as for the name Van, it is a nod to the rock group Van Halen.