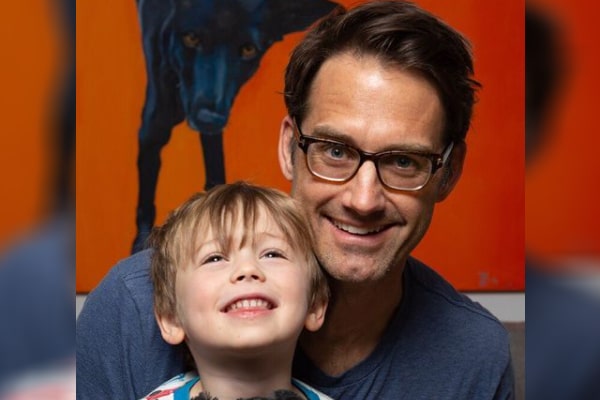 Jolie Jenkins is an actress known for her works in shows like S1m0ne, Alexa & Katie, The X-Files, and One Day at a Time. She first came into the spotlight due to her appearance in the comedy series Shasta McNasty.

With her growing popularity, the talented actress has amassed many fans who are curious to know about her personal life and relationships. So here are a few facts about Jolie Jenkins’s husband, David Pagani, and their love-filled lives.

Aforementioned, Jolie is a celebrated name in the entertainment industry. But her handsome beau is as talented and creative as she is. Jenkins’s husband, David Pagani, is a motion designer and illustrator with over two decades of experience.

Moreover, Pagani’s works are unique, and he was previously associated with Amazon Studios as Group Creative Director for a year. Similarly, Jolie Jenkins’s spouse, a Carnegie Mellon graduate with a BFA degree, also worked at FOX Sports as a producer.

Furthermore, Jenkins’s husband, Pagani, claims that his visual arts works are rooted in child-like wonder and curiosity for digital mediums. He brings interesting characters to life that connect emotionally with others. Based in LA, he’s been a freelancer for quite some time.

Thus, as an illustrator/designer, David Pagani’s net worth must be proliferating with so much grace. Besides, he has been married to the love of his life since 2001 and is blessed with two beautiful sons. Therefore, let’s move on to that.

Aforementioned, Jolie Jenkins and David Pagani have been married since 2001. They decided to walk down the aisle on October 27, 2001, after years of courtship. Since then, the power duo seems inseparable. Also, both David and Jolie are humorous and work in the industry. So, it is no surprise that Jolie Jenkins’s husband, David Pagani, is incredibly supportive of her career. The couple shares immense love and respect for one another. Like Jolie, David shares several beautiful moments of them on Instagram, both animated and real-life versions.

Moreover, where do you get a funny, beautiful wife, a doting mother, and vice versa? From that prospect, the Pagani couple is blessed to have one another.

After years into marriage, Jolie and David finally welcomed two beautiful sons together. David Pagani’s wife, Jolie, gave birth to Louis Rocket Pagani in December 2014. Similarly, they welcomed their second son, Hugo Pagani, in October 2018. The family of four seems to spend a lot of time together. Moreover, Jolie Jenkins’s husband, David Pagani, is always around his kids and is a doting father.

Jolie and her husband, David welcomed their sons Louis and Hugo in 2014 and 2018 respectively. Image Source: Jolie’s Instagram.

Fun fact about his second child’s name Hugo, Jenkins’s eldest son, Louie, insisted on naming his brother ‘Love-Love,’ and thus, Hugo Love Pagani happened. Additionally, the Pagani family are content with their lives, and both Jolie and David share a lot of pictures of their children on their social media.

Let’s hope we see more of Jolie Jenkins’s partner, David Pagani’s work in the coming days and wish for the Jenkins family’s prosperity.