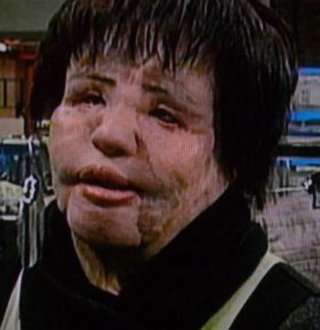 People in this day and age are on a constant quest for perfection, especially when it comes to their appearance. Plastic surgery is often the greatest option for well-known models in the entertainment industry since they are very self-conscious about their physical appearance.

Korean model Hang Mioku, who likewise became obsessed with plastic surgery, suffered a completely damaged face as a result of the procedure.

Here is a compilation of information about Hang Mioku, including her age, her plastic surgery addictions, images of her before and after the procedure, and what she is currently doing.

Mioku developed a dependence on plastic surgery at the age of 28.

When Mioku, who was born on July 8, 1963, was 28 years old, she had her first plastic surgery. She was so attracted by it that she repeatedly had plastic surgery on her face, which led to her eventually developing an obsession with it.

Her primary obsession was to look more beautiful than other people and get smoother skin.

But it had to be stopped because of the great risk that the consequences might have. Her doctors were the ones who ultimately disapproved of her choice and refused to do any additional plastic surgery on her, arguing that if she underwent silicone injections one more time, her face would grow more submissive.

However, Mioku was obstinate and unwilling to listen to the physicians, so she began to experiment with plastic surgery on her own.

She initially started injecting her face with the entire bottle of market silicone. She had to firmly suppress her yearning, though, because silicone was quite expensive. But the native of Korea, who had developed a serious obsession with plastic surgery, couldn’t maintain it for long.

She had no choice but to inject cooking oil into her face because she couldn’t afford silicones, a decision that radically changed the course of her life. Her desire for plastic surgery was not supported by the cooking oil insertions, which instead left her cheeks and forehead bloated and scarred.

Mioku’s injured face was the end result of desperate attempts at plastic surgery; as a result, she appeared so deformed that even her parents were unable to identify her.

After being taken to the doctor, it was determined that Mioku had a psychological condition that she was unable to control on her own.

Due to her obsession with improving her physical appearance through plastic surgery, the model, who was once a highly regarded face in the Korean entertainment industry with her modeling and singing skills, is finding it difficult to fit in with society today.

Her plastic surgery before and after photos

The Korean Model was unquestionably the best in her prime, with a bright and alluring glow on her face, prior to plastic surgery.

However, as we now observe Mioku’s altered facial features during the course of her plastic surgery, it unavoidably serves as a reminder that procedures are not always advantageous.

She received financial backing from her fan bases to undertake reversal surgery when news of her fixation went public.

Only 60 grams of foreign material from her face and 200 grams from her neck were successfully removed during her initial recovery operation. Desperate that the harm had already been done, hopeful Hang later undertook many reversal surgeries to restore her former appearance.

Her face virtually recovered from swelling after over a dozen reversal treatments, but the majority of her facial scars became permanent and more obvious than before.

She was employed by The Beautiful Shop, a store that sells used clothing, according to a 2013 article in Dailymail.

Mioku is still alive as of right now, but thanks to her obsessions with procedures and surgeries, her existence is as wretched as it is possible to be.