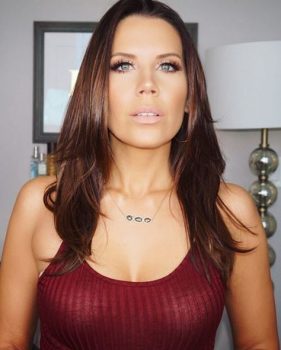 Tati Westbrook is an American social media personality, make-up artist and beauty blogger. She rose to fame from her YouTube channel Tati which has over 10 million subscribers. Westbrook has made a name for herself on the online community through her talent and hard work. She became the Women’s Wear Daily’s YouTube Breakout Star in 16th January 2015. Moreover, she is also the runner-up of Allure beauty blogger 2013.

Tati married her long time husband and fiance James Westbrook. She met James on social media and she knew he was the one for her. The couple started dating right away and got engaged in January 2012. The video of their engagement is available on her YouTube channel. After a long wait, the couple finally married in January 11, 2017. She shared the news on her social media sites and the video on her YouTube channel. The happy couple shared marriage vows at Maui with their close friends and family.

Furthermore, Tati has a step-son from James’s first marriage named Taylor Westbrook. Taylor is 24 years old and has appeared on Tati’s channel to do her make up. In addition, James has also made appearances on the channel many times.

Westbrook started her career from YouTube in November 2010. Initially, she posted videos about reviews of produts and personal vlogs. Since the, her channel has bloomed and now has amassed 10 million subscribers. Moreover, she has collaborated with YouTubers like Jeffree Star and James Charles. Tati has uploaded a total of 1,558 videos and has accumulated over 1.2 billion views from them.

In addition to this, she also launched her own beauty line ‘Halo’ beauty in early 2018. Her products include makeup products along with hair, skin and nail supplements.

The makeup Guru generates her fortune mainly from her YouTube career. Accorrding to Social Blade, her estimated monthly earnings on the site is $28.4k-$453.8k and her annual earning is $340.3k-$5.4 million. She also does advertising and endorsements of various brands on her channel and social media sites. On top of this, her ‘Halo’ beauty line also makes a hefty amount from sales. As of 2019, her estimated net worth is $6 million.

Feud with another YouTuber James Charles

Recenty, Tati had a feud with her close friend James Charles. It all started off with her dear friend James promoting Sugar Bear Hair, her competitors. Tati has done so much for James throughout his career, so this action made her feel betrayed. She uploaded an Instagram story saying that she was disappointed from all of this. Later, she uploaded a YouTube video titled ‘Bye Sister’ where she went in-depth on this topic. Westbrook made claims including James pressuring straight guys into dating him and him not returning the favor to Tati after all she had done for him.

The video became viral and James lost more than 2 million subscriber whereas Tati gained over 4 million subscribers. After a few days, James uploaded a video defending himself with proof. Since then, Tati has lost over 300 thousand subscribers. At the moment, she is taking break from YouTube and social media.

Westbrook was born in 1982 in Seattle, Washington. She is 37 years old at the moment and her birthday falls on 4th of February. Nothing is known about her parents at the moment. As for siblings, she has two sisters named Sabrina and Erica Westbrook. Presently, she resides in Los Angeles, California. Furthermore, she is American by nationality and belongs to white ethnic group.

Talking about her education, not much is known except that she graduated from a local high school in her hometown. Prior to fame, she was an image consultant and make-up artist for movies ‘Greek’ and ‘Unsolved Mysteries’.

The Glam Life Guru is 5 feet 8 inches tall and weighs 60 kg. She has a slim and fit body but the measurements are unknown.. Furthermore, she has dark brown hair and a pair of hazel colored eyes.

Brent Rivera reunites with his ex-girlfriend for a prank

Josie Canseco: Who Is She? Jose Canseco’s Daughter, Her Relationships, and Her Net Worth