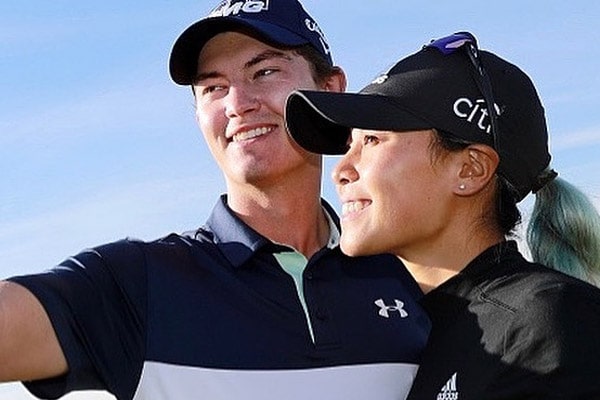 Danielle Kang or Danielle Grace Kang, an American professional golfer, is well-known to almost everyone who keeps up with the sport. Kang has won a number of tournaments and titles, including the US Women’s Amateur in 2010 and 2011, as well as the 2017 KPMG Women’s PGA Championship. Danielle Kang, a native of Las Vegas, Nevada, is now a member of the LPGA Tour, which she joined in 2012.

Since 2019, LPGA player Danielle Kang has been dating Maverick Scott McNealy, or just Maverick McNealy, a fellow professional golfer. In late 2016 and early 2017, McNealy was the top-ranked golfer in the World Amateur Golf Ranking. McNealy, a previous member of the Korn Ferry Tour, is currently on the PGA Tour.

Since 2019, Danielle Kang has been dating Maverick McNealy.

Danielle Kang, one of the most attractive female golfers in the United States, has been dating rookie Maverick McNealy since 2019. The happy couple met at The Summit Club, a golf facility. Kang and McNealy met in the club when they were in town for practice because they both live in Las Vegas.

Kang was undecided about telling McNealy that she was her date, but she couldn’t keep it a secret for long. Kang was asked to check his running dialogue on Golf Channel before McNealy’s Web com Tour event in the Bahamas. McNealy is her dork, Kang says, and he’s a love. She went on to say that she admires McNealy and that he admires her as well.

The golf power duo is quite well-acquainted with one another. Furthermore, the two share many of the same values and viewpoints. Maverick, Danielle Kang’s partner, considers himself the luckiest man alive since he has found a girl who understands the professional golfer’s lifestyle and challenges.

Kang isn’t afraid to post images of her boyfriend, McNealy, on her social media accounts. It’s evident from Danielle’s bonding with her young man, McNealy, that they are content with their romantic lives both on and off the course.

An Encouragement to One Another

In order to succeed on the golf game, Danielle Kang and Maverick McNealy draw motivation from one another. Because they work in the same field, they spend the most of their time together and frequently challenge each other during their respective trips. When they are unable to attend the tournaments of their loved ones, they never fail to motivate one another with motivational remarks.

Danielle Kang had some harsh words for her boyfriend, McNealy, when he was playing his final round at the Houston Open in October 2019. Kang was competing in her second Solheim Cup for the United States at the time. So she texted McNealy, her true love.

McNealy, Danielle Kang’s boyfriend, was given three instructions by Danielle Kang. Kang advised him not to glance at the leaderboards, to keep his mental scorecards more robust and strict, and to tell himself positive things after each shot. Maverick also had one of the finest rounds of his Tour that day, according to his significant other Danielle. He made five straight birdies on his way to a 7-under 65.

Only Kang does not push her boyfriend throughout the tours; McNealy, her boyfriend, does the same thing to her whenever things go wrong and she needs someone to understand how she feels.

With the start of 2020, Danielle Kang’s boyfriend, Maverick, is putting more effort into his time away from the golf course. McNealy, who is already quite proficient in Spanish, is now preparing to study Korean. Kang, his sweetheart, is the driving force behind his efforts to learn a new language.

Danielle Kang, an LPGA star, speaks English as a second language because she is a Korean girl. As a result, Korean is her first language. Kang frequently coaches her boyfriend and provides him with a word of the day to help him expand his knowledge base. She also gave McNealy a stack of Korean textbooks to help learning Korean simpler for him.

Danielle Kang and Maverick McNealy, a happy couple, are living life to the fullest, supporting and loving one other. The lovers have been dating for a year, and their bond is growing stronger than it was at the start. We wish Danielle and Maverick, golf’s power couple, all the best in their long-term love.