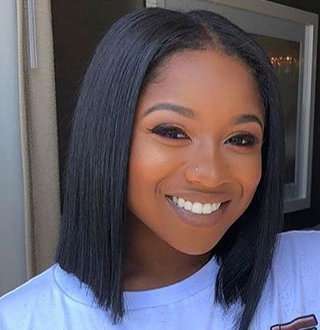 Reality television star, Reginae Carter’s bio revealed her immense net worth at such a young age along with her boyfriend’s identity.

Reginae Carter is known as a famous American R&B and hip-hop singer. She’s quite known as the famous rapper Lil Wayne’s daughter as well.

Reginae has participated in the television show, Growing Up Hip Hop: Atlanta and has published two novels, You Just Don’t Get It and Paparazzi Princesses.

Born in 1998, Reginae Carter celebrates her birthday every 29 November. She was raised in Louisiana, US, and is the infamous daughter of American rapper, Lil Wayne.

You May Also Like: Doug Marcaida Wiki: From Age, Background To Wife, Ethnicity Details On Weapon Specialist

Despite being a famous child, Baby Carter, Reginae followed the steps of her father and showed her musical talents on the video documentary, The Carter in 2009.

Her career in the music industry began in 2009 as she appeared as a part of the girl group, The OMG Girlz. She soon left the group to pursue a career as a solo artist.

Standing at the height of 5’4, Reginae released her first music video Mind Goin Crazy, after signing her father’s record label on 2 July 2014.

Reginae’s Net Worth In Millions

According to sources, the American singer has got an estimated net worth of $2 Million. Being the child of the famous rapper Lil Wayne, Reginae never had any problem regarding money.

Starting to appear in reality shows at a very early age, she’d already garnered some decent amount of wealth. Reginae’s appearance in the reality series, TOYA: A Family Affair brought immense money to her.

As the music artist started her career very young, she might be one of the rear 19-year-olds, who has a massive net worth. She’s the owner of a BMW, a Ferrari GTO, and a Range Rover to date that her parents gave her as birthday gifts.

In April 2017, there was a massive rumor surrounding Reginae getting caught up in a rough scuffle at the fraternity probate in Clark Atlanta University.

For the rumor to become more convincing, there was even a video of the brawl and Reginae was indeed present in the situation.

Upon getting a closer look at the video, Reginae seems to be pulling her friend away from the scene.

The friend that Reginae was pulling away happened to be Lourdes Rodriguez, who was a part of the OMG Girlz. Lourdes went live on Instagram explaining the actual cause of the fight

Apparently, a group of drunk girls at the probate show were leaving and pulled on Lourdes’ sweater. When she pulled the girl’s back, the girl started swinging fists at her.

Lourdes didn’t get hurt in the brawl that existed just a few seconds as everyone including Reginae was breaking the fight.

The 19-year-old music artist has a baby sister, and she spares no chance of showing her love for her sister. Reginae let the public know about the arrival of her sister, Reign Rushing, on 8 February 2018 on Instagram.

Reginae loves posting pictures of her sister and sharing every random moment of her.

Being a popular artist, Reginae somehow managed to get caught in another haters’ calling on her baby sister ugly.

She instantly clapped back at the haters by going live on Instagram, stating that she could handle any hate pointed at her but not her sister.

It wasn’t until a couple of months back that Reginae made her romantic affair with Rayshawn Lamar aka YFN Lucci official on Instagram.

She announced the identity of her boyfriend on Instagram on 26 March 2018 with a picture with Rayshawn at prom as they stole the title of Prom Queen and Prom King.

After the announcement, Reginae hasn’t hesitated a bit to show off her charming partner.

While the couple has been making some jealous faces, they’ve also gained a lot of criticisms regarding their age gap. YFN Lucci, being 27, and Reginae, being 19 have eight years of an age difference, but since they’re not bothered by it at all, critical opinions are pointless.

The pair is supportive of each other, especially YFN, as he once reminded Reginae that he had her back, posting a picture of her with cute emojis when she was having a diss with Instagram star, Jayda Ayanna.

So, no matter how much some people might be hating on them, the pair doesn’t seem to be giving up on their relationship any soon.