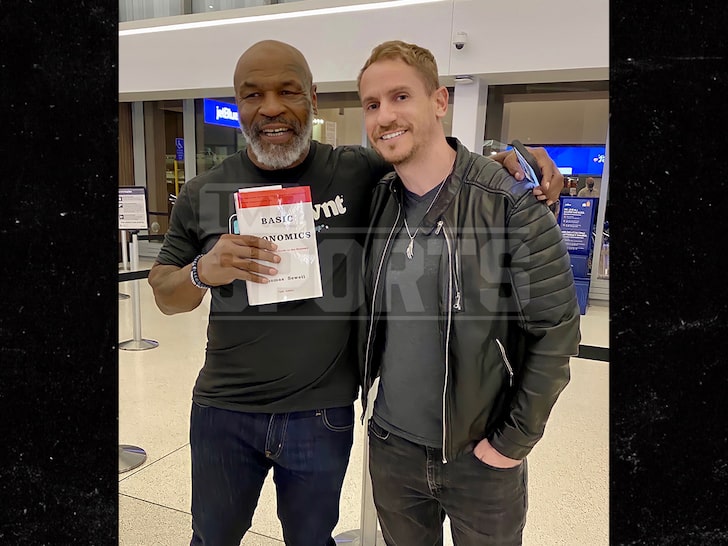 Mike Tyson certainly doesn’t mind fans who respect his personal space, as evidenced by a photo he took with a fan only minutes after pummeling another man on a flight.

Tyson all smiles in a photo obtained by TMZ taken outside the JetBlue flight’s gate. According to reports, the photo was taken shortly after Mike stepped off the plane, which is when he emptied his fists of rage on an “overly exuberant” fan’s face.

Mike was incredibly polite and relaxed, despite his antics just moments earlier, according to the fan in our photo. Because Tyson is such a businessman, the fan claims he got Mike the book “Basic Economics” by Thomas Sowell.

Mike, for whatever reason, was still holding the book when he landed in Miami on Thursday night.

Mike may use the new photo to his advantage, demonstrating that he’s cool with fans who are cool with him. Even before the jet left the gate, Tyson’s team said that the man on the plane, Melvin Townsend III, got too hostile and harassed Mike, even throwing a water bottle at him.

Townsend has hired Morgan & Morgan’s Matt Morgan as his counsel. Matt claims that interactions between the two men were initially amicable, but that things quickly deteriorated “Mr. Tyson was plainly irritated by an extremely enthusiastic fan at one point and began striking him excessively. This scenario may have been averted if the flight attendant had been contacted. Prior to being struck by Mr. Tyson, our client denies throwing a water bottle.”

We’re told Townsend hasn’t chosen whether or not to pursue Mike in court, but it sounds like that’s where things are headed.