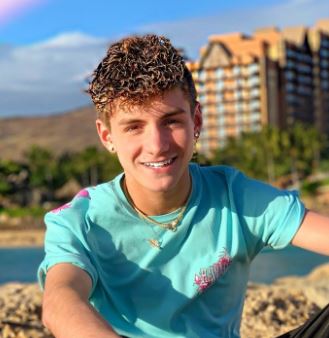 Mikey Tua is an American actor, dancer and social media celebrity. He developed a love for ballet at the age of eight. The dancer also took an interest for acting and followed his brother foot-step Jojo Tua. Fans consider him to have a bright future after looking what he has already accomplished before 18.

He played in few movies and series but he turned heads after dating the YouTube and musical.ly star, Danielle Cohn. Here we talk about his dating life, net worth, bio, backlash and much more….

Mikey Tua is dating the musical.ly and YouTube star Danielle Cohn. They remained friends after they first met because Danielle was dating fellow musical.ly star, Sebastian Topete. However, Mikey and Danielle started dating each other shortly after Danielle broke up with Sebastian. Danielle, age 14, has gained mass of fans from her creative contents. Furthermore, she is also a singer and has featured her boyfriend in her music video, ‘Only You’.

Fans went to cheer on for the couple after knowing Mikey saved his girlfriend’s life, literally. Apparently, the accident occurred when they were traveling in a car together. Tua saved his girlfriend from having herself smashed to the windscreen. After the accident, she suffered a black-out. Doctors found Danielle broke her collarbone. Thankfully, Tua escaped with minor injuries.

They seem perfect for each other and Danielle also posted a picture on twitter informing that Mikey saved her life. The couple posts a lot of picture flaunting their relationship on social media. We can’t be sure of their long term stability as they are very young and are prone to have a change in their feeling for one another as they grow older.

Mikey Tua and his girlfriend faced backlashes from their viewers and fans. Apparently, the couple made video of themselves getting married at Las Vegas and announcing Mikey’s girlfriend pregnancy. As the couple was very young to even get legally married, Social Media users were all curious and surprised. The couple gained a lot of attention for their act and saw an increase in their audience. However, Mikey and his girlfriend revealed it was all an elaborate prank on their Gender-Reveal surprise party.

Consequently, The prank did not go well. Audiences were filled with rage after knowing the truth and back lashed at the couple. Many viewers tweeted and left negative comments explaining it was too serious matter and should not be joked about. They faced many negative comments and tweets. Furthermore, fans even went on to say it was all a publicity to gain viewers.

After realizing their mistake, Mikey and his girlfriend posted a video apologizing and decided to donate 15% of their profits to Planned Parenthood. Furthermore, the young couple responded, they did the prank to spread awareness about unprotected sex to the young viewers.

Mikey Tua’s Career and Net Worth:

After following his brother footstep, Mikey started his career as an actor. He made his screen debut in ‘Try to Smile’ movie as a character name “Austin”. Later, he played in the short film ‘Coma’ , directed by Su Chen.

In addition, He also has a YouTube channel, with more than 280 thousand subscribers. However, he mostly uploads videos with his girlfriend and is not very active on YouTube. Mikey is also a member of the Instagram group ‘Slightly Above Average ‘. The talented actor is currently to Impact Group and MSA Talent Agency.

Mikey Tua’s life has exposed him to many careers such as actor, dancer and social media. He has accumulated a good amount of wealth for his sage. His estimate-worth is $300,000. However, he is only at the start of his career and his career in future is soon to reward him with lots of money.

Mikey Tua’s was born in 2002. He celebrates his birthday in June 12, making his age sixteen. The young actor was born to the parents Delvin Tua and Katie Tua. In addition, his brother, Jojo Tua, is also an actor. Mikey’s parents  home schooled him for his education. His birthplace is Silverdale, Washington.

Mikey is still in his growing phase and has a height of 5 feet 5 inches and a weight of 54 kg. His eye color consists of Blue and hair color of Auburn.