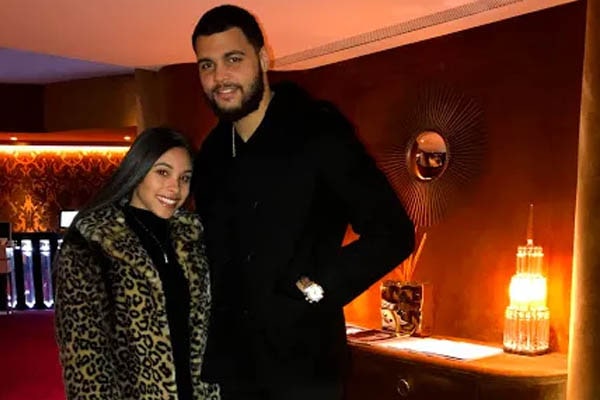 Michael Lynn Evans II, better known as Mike Evans, is a well-known American football wide receiver who now plays for the Tampa Bay Buccaneers of the National Football League. Evans, an explosive wideout, spent his whole career with the Buccaneers in Florida. He played collegiate football at Texas A&M before being picked by the Buccaneers in the 2014 NFL Draft. Evans earned consensus first-team All-American honors at Texas A&M after setting a school record with 1394 receiving yards on 69 receptions.

Mike Evans is a responsible husband and father in addition to being a successful athlete. He has been married to Ashli Dotson since 2016, whom he met for the first time during his undergraduate years. Learn more about Mike Evans’ wife, Ashli Dotson, and their marriage in this article.

Mike Evans and Ashli Dotson met in college and fell in love. Mike Evans played college football at Texas A&M, as previously stated. During his time at Texas A&M, he won a number of awards and trophies. Nonetheless, that was not his only triumph throughout his college years. Evans also met his future wife, Ashli Dotson, at college in 2013. Dotson was a student at Blinn Junior College at the time.

Soon after meeting, Ashli Dotson and Mike Evans learned they shared many common interests, such as going to the movies and traveling to new areas. It wasn’t difficult for them to plan their first date. Since then, the pair has spent as much time as they can together watching movies and traveling to other locations with their pals.

Mike Evans proposed to his long-term girlfriend, Ashli Evans, with an engagement ring on December 19, 2014, when they were celebrating Christmas with their loved ones. According to Dotson, her present husband Mike recalls it as one of the most nerve-racking days of his life.

Since being associated with NFL player Mike Evans, Ashli Dotson has gone to practically every one of his games. She is often seen at events and his team’s home games at Raymond James Stadium. Dotson always wears a Pirates jersey with her husband’s name on the back when she goes to his games.

Mike Evans married Ashli Dotson on 13 February 2016, two years after their engagement, in a lavish wedding. Right after their engagement, the pair began planning for their big day. Todd Events was chosen to create and plan their special day, and The Corinthian was chosen as the venue for their wedding ceremony and reception. Ashli and Mike worked with Nadine Moon of Who Made the Cake on their cakes.

Furthermore, Trace Kennedy, a popular singer, sang the ideal rendition of their wedding song, ‘Thinking Out Loud’ by Ed Sheeran. Dotson and Evans also hired DJ Steve Nice to keep the dance floor blazing all night. The wedded couple stayed in the Presidential Suite at the JW Marriott the next day, Valentine’s Day. The hotel’s management also gave them a complimentary couple’s massage, which was the ideal way for them to begin their first day as husband and wife.

Evans considers himself extremely fortunate to have Ashli Dotson as a major supporter in his life. Everyone can see from their photos together that Ashli and Mike are having a great time in their marriage.

Evans and Dotson are the proud parents of two children.

Ashli Dotson’s marriage to Mike Evans not only provided her with popularity and a loving companion but also the opportunity to be a mother to two children. Ashli Dotson and Mike Evans have two children, son Amari Thomas Evans and daughter Ariah Lynn Evans. Amari, their youngest child, was born on December 28, 2019, weighing 7 pounds 14 ounces and measuring 19 inches. Mike Evans’ wife, Ashli Dotson’s blog, All About Ashli, has all the facts on their son, Amari’s birth, including her labor experience.

Furthermore, Mike Evans’ wife, Ashli Dotson Evans, is a stepmother to Mike’s former relationship’s daughter, Mackenzie Evans. Mackenzie was the flower girl at the couple’s wedding in 2016. The joyful parents of three frequently post images of their children on their various social media profiles. The Evans brothers often dress up for their father’s home games as Buccaneers.

Ashli Dotson currently lives in Tampa, Florida, with her husband and three children, in a $1.2 million home she purchased in 2018. Dotson and Evans are happy in their marriage, and we hope their relationship lasts forever.