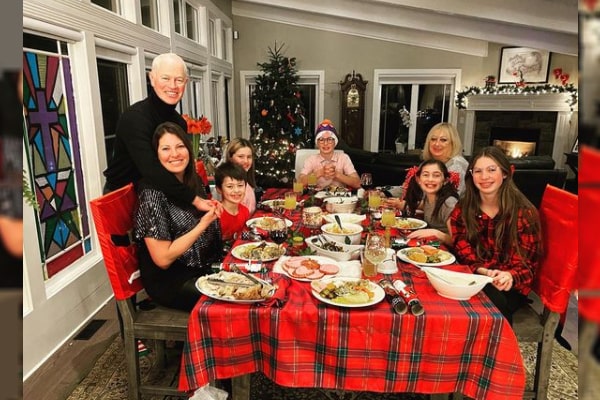 Neal McDonough is known for his light blue eyes and deep, resonant voice. He is often seen and heard in the adaptations of comic books. Besides, his disapproval to budge from his belief has massively affected his career, but he does not have remorse for his sleeping career. Instead, Neal began producing movies himself and is launching his kids into the world of cinema.

Yes, Boomtown’s deputy district attorney, David McNorris, aka Neal, is a doting father of five kids with his decade-long partner, Ruve McDonough. Here, we shall tail the youngest in the McDonough family, James Hamilton McDonough.

Youngest Child In The Family

The McDonough pair welcomed their youngest son, James Hamilton, on March 31, 2014, weighing 9 lbs and 22 inches long at the time of birth.

On the arrival of the youngest McDonough, their representative revealed that Ruve and Neal were proud to announce the news. As James joined his siblings, Morgan Patrick McDonough, Catherine Maggie McDonough, London Jane McDonough, and Clover Elizabeth McDonough, he was showered with loads of hugs and kisses.

Furthermore, papa McDonough had previously joked about him and his son, Morgan being the McDonough House of Estrogen. However, he backed up his statement claiming they wouldn’t have any other way. Well, the birth of James must have evened out the gender divide.

Aforementioned, Neal McDonough’s son, James Hamilton McDonough, is the youngest child in the family. Therefore, he must have received all the love from his siblings and parents combined. What’s more, is that he has double the people he can look up to for inspiration.

Talking about inspiration, McDonough’s oldest sibling, Morgan Patrick, seems to have found his passion in sports. He is doing very well as a school baseball player and interestingly being co-coached by his father.

Likewise, James’ sister, Catherine Maggie, started modeling alongside her mother while London is to make her debut as a child actress via their father’s movie.

On the other hand, he and his sister, Clover Elizabeth, are keeping things grounded. However, we shall hear about them in the entertainment industry in the future.

As mentioned earlier, James Hamilton McDonough’s parents married in 2003. But did we say their love was kind of a ‘love at first sight kind of thing?

The McDonough couple met in 2000 while Neal was filming Band of Brothers at the time. Neal further revealed that he fell for Ruve the moment their eyes locked.

Moreover, during an interview, Neal also said that he had to break up with his partner. And while doing so, he claimed he straightforwardly told his former partner that he’d found the woman he’d marry. Thus, they broke up over PHONE! We do not know about others, but James McDonough’s father must have been the worst guy his ex-girlfriend ever dated.

Ruve and Neal McDonough exchanged vows on December 1, 2003, and their honeymoon lasted for seven weeks.

Neal McDonough’s son, James Hamilton McDonough, has his parents to look up to as a couple of inspirations and might as well follow their footsteps in the coming days.