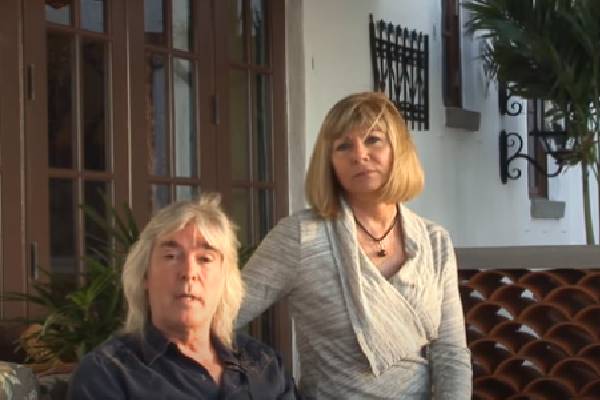 Clifford Williams, also known as Cliff Williams, is a member of the hard rock band AC/DC from the United Kingdom. From a young age, the well-known backing vocalist has dedicated his life to music.

Cliff Williams is a responsible husband and father in addition to being a great performer. Since 1980, he has been married to Georganne Williams, a philanthropist.

Learn more about Cliff Williams’ wife, Georganne Williams, who has always stood by his side in good times and bad.

Since 1980, he has been married to Georganne Williams.

Cliff Williams and Georganne Williams tied the knot in 1980. The great musician keeps his personal life a closely guarded secret. As a result, the location and other specifics of their wedding ceremony remain a mystery.

Cliff Williams and his wife, Georganne Williams, have been married for four decades and are still going strong. Facebook is the source of this image.

Cliff Williams and Georganne Williams’ family was complete after the birth of one daughter and a boy, Erin and Luke, over the course of their four-decade marriage.

Erin Lucas, the eldest of the Williams siblings, was born in 1985, after her parents had been married for five years. Cliff Williams’ wife, Georganne, had her second child, Luke Williams, exactly a year after Erin was born, in 1986. The parents of two children are content in their marriage.

The Williams Family Foundation is a not-for-profit organization

Williams’s couple, in addition to having a lucrative job and a beautiful lifestyle, is also involved in philanthropy. The Cliff and Georganne Williams Family Foundation is a domestic non-profit organization founded by the power couple. This foundation’s headquarters are in Harbour City, New York, however it has been inactive since 2018.

The foundation is estimated to have $2.9 million in assets, with $141K in dividends and $0K in contributions, respectively. The company’s formal registration was completed on June 5, 2015, and they were awarded a maximum grant of $45K for the duration of their operations. Clifford Williams, Erin Lucas, and Georganne Williams are the company’s inactive directors.

The Heights Foundation is supported.

Cliff Williams, the bassist for AC/DC, and his wife, philanthropist Georganne Williams, sponsor The Heights Foundation in Fort Myers, Florida, and encourage others to do the same.

The Heights Foundation’s purpose is to use education, opportunity, and the arts to break the cycle of poverty. With active and dedicated leadership, the foundation is a grassroots, hands-on organization that embraces the community’s strength and variety.

Cliff Williams’ wife is a supporter of the organization, which aims to help local individuals improve their lives. Not only for the residents, but also for the children and their families, from infancy to old age, the pair is doing everything they can to aid.

Cliff and Georganne Williams sponsor music donations in addition to the foundation. The AC/DC bassist donated instruments for an auction in 2019. This sparked interest, and fans paid a high price to get a guitar signed by the bass guitarist for Grammy-winning rock band AC/DC.

To summarize, the services of AC/DC bassist and his wife, Georganne Williams, to those in need are admirable and serve as an example to society.