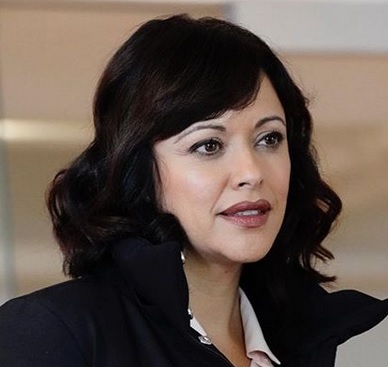 Who is Marisa Ramirez?

Marisa Maguire Ramirez famous as Marisa Ramirez is an eminent American actress and model. Further, she is an active actress actively working on the acting industry from around 1997 to the present. Moreover, she is famous for her work on television soap operas from which she is popular as a soap opera actress. Additionally, she is notable for her roles on General Hospital, The Young and the Restless, and several tv series and films.

The highly skillful actress Marisa Ramirez first stepped into this world on 15th September 1977 in Los Angeles California, U.S. Currently she has completed her 43 age of life as of 2020. Further, she is an American citizen and falls under the mixed ethnicity of Mexican, Irish, and American Indian. Her birth sign is Virgo.

Talking on her family background, she hasn’t disclosed her family as well as siblings’ details.

The bold and beautiful actress Marisa Ramirez married to Nathan Lavezoli on September 22, 2002. They were in very happy relationships by sadly in 2011 after 9 years of togetherness they divorced and split up. The main reason behind their divorce is still unknown. The former couple wasn’t blessed with any children.

Besides, talking on her current relationship status she hasn’t disclosed anything about her private life. According to our records, she is probably single. But on January 22, 2016, Marisa announced that she was expecting a child and in May 2016 she welcomed her daughter Violet Rae. Violet’s father is not revealed yet and Marisa hasn’t disclosed anything about her child’s father.

Marisa Ramirez Career in acting and Net Worth

The successful actress Marisa Ramirez began her career as a model and the age of 13 she was brought to the attention of an L.S. modeling agency. Then she led to an international modeling agency and later started acting and hosting. She has played several films as well as tv series. Firstly talking on TV series, she made her first tv series USA High in 1998 as the role of Liza. Then some of her important tv series in her career are General Hospital (2002), CSI: Miami (2003), The Young and the Restless (2006-2007), Body of Proof (2013), and Blue Bloods (2013-present).

Similarly, talking on her films she made her debut feature film All Souls Day as the role of Alicia. Then after she starred in Itty Bitty Titty Committee(2007), Columbia Ave(2009), The Funeral Planner and Contract (2010), and The Extendables (2014).

Heading to the wealth, her estimated net worth is approximately $3 million U.S. Additionally her salary, house, and other property details are not available.

In the context of body measurements, she has a perfect body size of 35-24-36 Inches. Further, she stands at the height of 5ft 6inches and weighs around 54kg. Moreover, she has a pair of dark brown eyes and black colored hair. She has a straight sexual orientation. Additionally, she wears a dress of size 4US and a shoe of size 7.5US.

Is Marisa Ramirez active on any social media?

Joey Votto: Does He Have a Wife? Where Did His Gay Rumors Come From?