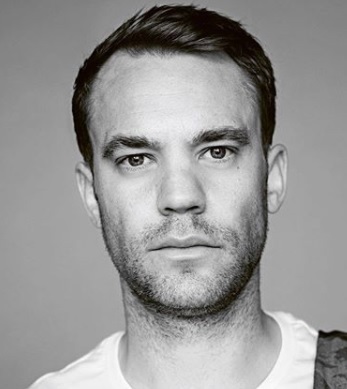 Manuel Neuer is a renowned professional footballer who plays a position of GoalKeeper. Further, he plays as goalkeeper and captain of both Germany National Team and Bundesliga club Bayern Munich. Recently, his lead to Bayern  Munich and his excellent performance helped his team to lift the sixth Champions League trophy. Thatswhy is considered as the greatest goalkeeper of his generation and has been considered as sweeper-keeper. He wears jersey no 1.

The greatest goalkeeper of all time Neuer first came in this world on 27 March 1986 in Gelsenkirchen, West Germany. Currently, he has completed 34 age of his life as of 2020. Further, he is a German citizen and belongs to white ethnicity. His birth sign is  Aries.

Talking about his family details he is the son of father Peter Neuer and mother Marita Neuer. He grew up with his brother Marcel Neuer who is a soccer referee. Discussing the educational background, he attended and graduated from  Gesamtschule Berger Feld.

Is he Married? Past Affairs

Talking about the relationship status of Neuer, currently, he is married to his long time girlfriend Nina Weiss. Further, the couple started dating from around 2015 and tied a knot on 21 May 2017 in Tannheim, Austria in a civil ceremony. Then again celebrated a marriage ceremony by a church wedding in the Cathedral of Santissima della Madia in Monopoli Italy on 10 July. The couple is enjoying a happy romantic relationship together.

Besides talking on his past affairs, he once dated Kathrin Gilch in 2009 and broke up after five years in 2014. Moreover, his other past affairs are unknown and genuine data will be post soon after review.

Moving towards the career of the greatest goalkeeper he started career since 1991. Further, his youth career started from 1991  to 2005. On the progress of youth teams, he made his debut in Germany under the 21 national team on August 15, 2006, against Netherland. On the way in 2009, he won the 2009 UEFA European Under 21 Championship in  Sweden against England in which his performance played a great role to make him team win. Then after he was invited to senior German squad on 19 May 2009 fro a tour of Asia. He made his debut match against UAE in the tour. After all, in the 2010 world cup, he was chosen as the number one goalkeeper of the national team.

Moving to the 2014 World Cup he leads the German team as a goalkeeper and performed well. Then due to great coordination of the team, the team reached final against Argentina. Hence the team won the world cup 2014 with the lead of one goal. During the whole tournament, he performs excellently and proved him to be the best goalkeeper of all time which made him win Golden Glove Award 2014. In the 2018 world cup, he leads his team but unfortunately, the team couldn’t move forward after group stage match. Though he is the best goalkeeper in the world.

Talking about his club career he joined Bundesliga club Bayern Munich in 2011 and still playing from the same team as goalkeeper and captain. He is the key player of his team and has made his team win several times. In every season his excellent performance results from him winning several awards and titles of Sweeper Keeper.

Heading to the net worth, the estimated net worth is around $40 Million in 2020 which he collects from a football career. Moreover, his salary is $7.6 Million.

Recently  Bayern Munich has held the sixth champion league trophy with the captainship of the greatest goalkeeper of all time Manuel Neuer. Munich scored 1-0 against Paris Saint Germain PSG which one of the greatest moments in Neuer’s career as well as entire teams’ career.

In the context of Physical statistics, Neuer has a perfect athlete body structure. Further his chest size is 44in, waist size is 33in and biceps is 14in. Moreover, he stands at the height of 6ft 4inches and weighs 92kg. He has light blue colored eyes and brown colored hair. His dress size and shoe size are unknown. Additionally, he has a straight sexual orientation.

Moving towards social media he is currently in touch with Instagram and Twitter and has a huge number of fans. Further, he has around  10 Million followers on Instagram and around 3.9 Million Followers on Twitter.