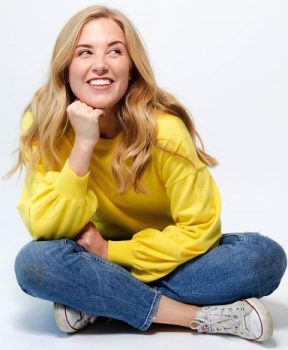 Maddie Moate is a British TV presenter. She is most known for her role in the factual series ‘Do You Know?’ on CBeebies. Motae is great at her job and is an audience favorite. As a result, she won the Best Presenter BAFTa at Children’s BAFTAs in 2017.  Furthermore, she also has an educational YouTube channel under the same name. Her channel has over 54k subscriber and a total off 8.2 million video views.

Who is Maddie Motae engaged to?

Moate is engaged with long-time boyfriend Greg Foot. The couple got engaged on 15th of February 2018. Her fiancée Greg is a science presenter at BBC. Foot proposed the beautiful Maddie during their holiday in Thailand. Moate announced the engagement via social media site Instagram. Since their engagement, they have been enjoying time together and have visited numerous locations for vacation.

The TV presenter’s career in showbiz started in 2011 with her series ‘The App Show’. It was an online comedy series which aired on LadyGeek till 2012. The same year, she presented ‘Newsburst’ on O2 Guru TV and Home of the Future for Channel 4. Furthermore, she also made three films for Samsung which attracted 1.5 million followers. Maddie also presented a series of films for the giants Intel and Argos.

In 2014, she became the lead presenter for BBC Earth Unplugged on YouTube. Later on, BBC America compiled the show and highlighted it in a one-off show ‘It’s a Mad Mad Maddie World’. In addition to this, she became the technology expert on BBC 5 Live Saturday Edition in the same year. Moate presents a factual series ‘Do You Know?’ for CBeebies since 2016 with third and fourth series set to follow.

What is Moate’s Net Worth?

A majority part of Maddie’s fortune comes from her TV shows. As per the site PayScale, the average salary of a TV presenter is $61,463 yearly. So, she must have amassed a lot of fortune alone from his profession. Furthermore, she also earns from her YouTube channel. As per SocialBlade, she makes an estimated $3.7k-$59.9k from her YouTube videos. Despite this, her net worth is unknown. However, it surely exceeds a million dollars.

Moate was born in the year 1988 in Northfolk, England. Her birthday falls on the 26th of July and her age is 30 years. The TV presenter has a sibling named Robyn Moate-Smith(sister). Robyn is married and has a son. Despite this, information concerning her parents is unknown.

The highly talented  Maddie Motae attended the University of Bristol. She studied television, film and theatre but went on to become a Science TV presenter. Moreover, her nationality is British, is a Leo and belongs to the white ethnic group.

Beautiful and elegant Maddie has a height of 5 feet and 7 inches. Gorgeous blue eyes and blonde hair further compliment her beauty.