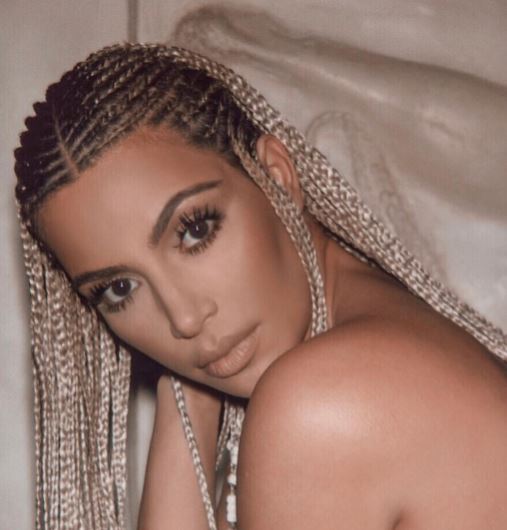 She got the limelight in 2007 on the reality TV show, Keeping Up with the Kardashians (KUWTK). She also runs KKW beauty, a successful beauty and fragrance line.

Kim Kardashian entered the business world when she opened a boutique shop D-A-S-H in Calabasas, California. She however was popular due to her leaked sex tape with her then boyfriend Ray J in 2003. The incident led to Kim filing a case against Vivid Entertainment who distributed the film. She reportedly earned $5 million from that lawsuit. Kim was also part of the reality show Keeping Up with the Kardashians. In the show she talked about modeling for Playboy, she did it on the December of 2007.

Kim’s sisters Kourtney and Khloé, Kardashian is involved in the retail and fashion industries. They have launched several clothing collections and fragrances.Kardashian appeared on the cover, and in a pictorial in Paper’s winter issue in 2014 photographed by Jean-Paul Goude.

In June 2014, Kardashian released a mobile game for iPhone and Android called Kim Kardashian: Hollywood. The objective of the game is to become a Hollywood star or starlet.The game was a hit, earning US$1.6 million in its first five days of release.

Kim Kardashian has been endorsing many brands and experts say she is paid $75,000 to $300,000 per social media posts.

In 2000, 19-year-old Kardashian eloped with music producer Damon Thomas which did not last long. The divorce was filed on 2003 by her then husband who blamed the separation on physical and emotional abuse. Before the completion of the divorce, Kim stated dating singer Ray j.

In May 2011, Kardashian became engaged to NBA player Kris Humphries, then of the New Jersey Nets, whom she had been dating since October 2010.They were married in a wedding ceremony on August 20 in Montecito, California.After 72 days of marriage, she filed for divorce from Humphries on October 31, citing irreconcilable differences.

Kardashian began dating rapper and longtime friend Kanye West in April 2012, while still legally married to Humphries. Kardashian and West became engaged on October 21, Kardashian’s 33rd birthday and married on the 24th of May, 2014 in Italy.

Kim K has given birth to three wonderful babies North West, Saint West and Chicago West. Rumor has it that she is expecting another baby on the way and the name of the baby is not yet announced.

How much is Kim Kardashian’s Net Worth?

With many endorsements, photoshoots and her own beauty lineup, Kim K is a very successful woman with a lot of talent down her sleeves. As per 2018, the celebrity is supposed to be worth about $350 million.

She was born to Robert Kardashian and Kris Jenner. Her mother also is a famous TV personality, her manager and businesswoman.

Kim has 3 siblings: Kourtney, Khloe and Robert and 2 half-siblings: Kendall and Kylie Jenner.

Kim has an attractive body which measures 38-26.5-41. She can be seen often posting her body on social media which grabs a lot of attention.

Her hair color is brown and eye color is dark brown.