In response to haters, Scott Adams and his wife Kristina Basham 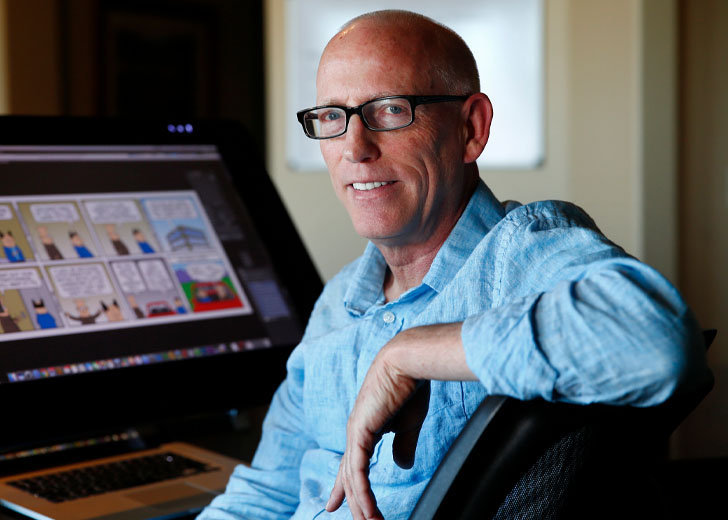 On July 11, 2020, Scott Adams, the author of the Dilbert comic, wed Kristina Basham.

Due to the age gap between the 32-year-old bride and the 63-year-old husband, the wedding attracted a number of trolls and derogatory remarks.

Adams responded to the haters directly and with the aid of his wife.

Trolled Due to Age Disparity

In 2016, Adams and his wife Kristina Basham, a pilot and musician, started dating. People have been making disparaging remarks about them due to their age gap ever since they began dating.

On July 12, 2018, a Twitter user shared his thoughts on the romance between Adams and Basham. He claimed that Adams was wise and understood the former model was sole with him for financial gain, but he still allowed her to be with him because he desired a young female in his life.

Similarly, on July 8, 2018, Adams shared a picture of his future wife on Twitter. A follower made fun of them by commenting, “your granddaughter?”

These are just a few examples of the frightening and hurtful remarks the couple encountered.

They clapped back at the disparaging remarks.

On July 11, 2020, Adams and Basham were legally wed after spending four years together.

A few days after the wedding, the couple retaliated against the disparaging remarks made about their union and love.

The creator of the comic initially responded to the naysayers on Twitter. He satirically acknowledged the “bitter and shattered people” who were critical of his wedding on July 14, 2020. He added that he and his wife considered those cruel remarks amusing.

Scott’s pilot wife replied to her husband’s post on July 15, 2020, and addressed the hurtful remarks about Scott’s wedding gown. She admitted that although he wanted to wear a jacket and tie, she dissuaded him from doing so because of the heat.

Later, she went into further detail about their age difference. “I am over 30,” she wrote. The gap in ages is unimportant. I am a mature WOMAN.

Adams was previously married to Shelly Miles before Basham. In July 2006, the ex-couple wed on a yacht in the San Francisco Bay.

For Adams, who was 49 at the time of the wedding, it was his first marriage.

But for the then-39-year-old Shelly, who had two kids—a son who was six and a daughter who was eight—it was her second. The couple separated in 2014.

In a similar vein, Basham was married to Chad Basham. They share the parenting of their two daughters.

Share
Facebook
Twitter
Pinterest
WhatsApp
Previous article
Children that are faithful and adorable grandchildren are a blessing for Donnie Swaggart and his wife.
Next article
What Is Cirroc Lofton’s Net Worth After Taking A Break From Acting?

The Real Death Survivors Are Les Stroud and His Son Logan!

Brian Austin Green and Sharna Burgess are deeply in love — and it’s showing in their personal lives.