Graham Stanier, an openly gay man, has married after 32 years of dating. 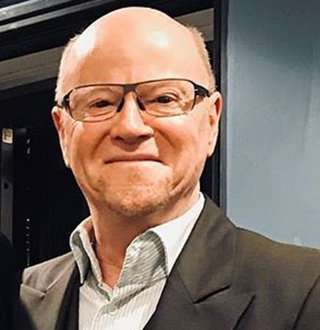 The Rochdale native is best known for being the in-house therapist in the British tabloid talk show The Jeremy Kyle Show — a show where their friends and family confront guests in an attempt to resolve issues of romance, alcohol, and drug-related problems as well as family disputes.

Graham, age 59, had attended the Redbrook School which is located in his hometown, Rochdale. As for his height, the Rochdale native stands 5 foot 5 inches tall (1.65 meters).

Looking Into Graham Stainer’s Net Worth

The Jeremy Kyle Show star is a mental health nurse registered with the Nursing & Midwifery Council.

Besides being a registered nurse, he’s also a qualified Psychotherapist and has a membership if the British Association for Behavioural & Cognitive Psychotherapies.

At The Jeremy Kyle Show, the 59-year-old acts as the Director of Aftercare. He has been with the show since its premiere in July 2005, helping Jeremy Kyle during the show and aiding guests after they are on air.

His earnings from the show have remained a private affair; so has his net worth.

A psychotherapist in the United Kingdom pockets a median salary of £33k ($43.5k) every year. Given his celebrity status, Graham ought to charge much more for his services.

Graham Stanier undoubtedly garnered a lot of fame for helping the host on the ITV daytime show, offering guidance to troubled guests, and sharing his professional opinion on the vast range of problems faced by people every day.

As being qualified and highly experienced practicing psychotherapist with excellent therapeutic skills, Graham is seen regularly tweeting about promoting the importance of speaking about depression.

Graham Stanier is a married gay individual; his partner is his longtime lover Steve.

The lovebirds shared a committed relationship for more than three decades before finally walking down the aisle on 3 April 2016.

Although the psychotherapist announced about him getting married on Twitter, he has never detailed information about his husband.

He has been with his husband since 1984. Soon after his announcement, fans of The Jeremy Kyle Show flooded his timeline with congratulatory messages on his married life. A fan wrote:

As of yet, about Graham’s husband: other than his name, not much is known about him.

As fans of The Jeremy Kyle Show grew anxious with not knowing the identity of Graham’s husband, a rumor began to circulate online.

The rumor alleged that Graham might be to none other than the show’s security, who just happens to share the same name as Graham’s husband.

To squash the false rumors, on 7 April 2016, The Jeremy Kyle show official Twitter handle sent out a tweet with a picture of Graham and the security personnel and a caption that read:

The tweet concluded by asserting that they remained good friends.

What Is The Net Worth Of Brittney Atwood, Roman Atwood’s Wife?