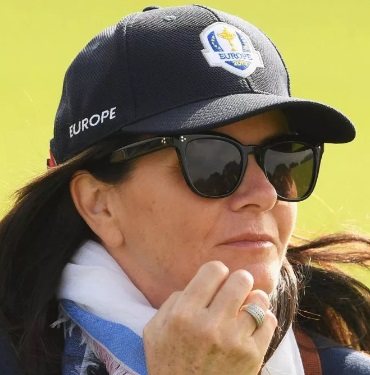 If you are not new to the golf games then you already know who Clare Fleetwood is. She is the wife of the rising golf gamer Tommy Fleetwood. Besides being the wife she is also the manager of her husband since 2015. She has previously worked as the Vice president for Hambric Europe. The couple has an age gap of 20 years but still manages to have good chemistry between them.

Clare started her career as vice president of Hambric Sports Group. Later in 2015, she started to work as a manager for her current husband. Besides these, She is also a Trustee of the Richard Burns Foundation.

Clare married is happily married to British golfer Tommy Fleetwood. The Duo married in December 2018 and they are blessed with a son Franklin. Franklin was born in September 2017. Clare also has two sons Oscar and Mo from her previous marriage to Andy Craig. Oscar and Mo live with Clare and Tommy. Tommy is being a great stepfather and helping  Clare to raise her children.

Despite having the age of 20 years the couple shares a great bond and is happily married.

Famously known as Mrs. Fleetwood was born as Clare Ryan. She was born in 1971 and she is 48 years old. People knew her as Clare Craig after her first marriage to Andy Craig.  Clare now goes by Clare Fleetwood. She is a mother to three sons and a manager. Despite a busy schedule and life, she has time to look for herself. Every time she looks so stunning and much younger of her age. The mother has beautiful blue mesmerizing eyes. She is a proud mother and also plays the role of supporting, motivating wife.

When it comes to sharing personal life with media Clare seems pretty shy. She is not fond of social media and only uses twitter. The mother is also an animal lover and has gifted a dog to her son Franklin. During her free time, she loves spending time with her children and loving husband. She is also working pretty hard to provide a luxurious life to her children. She seems pretty well managed.