Catt Sadler’s Husband Is Unstable, and She’s Dating a New Boyfriend After Getting Divorced ‘Twice’ 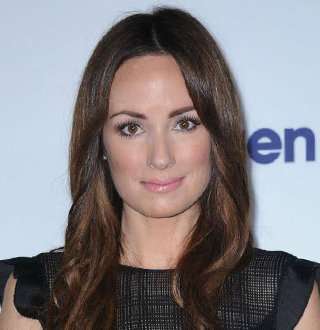 American television personality and actor, Catt Sadler has a history of failed relationships one after another but this hasn’t stopped her quest of finding new love again and again.

The Indiana native is best known as the former anchor of E! News, who used to appear in the shows such as E! News Weekend and Daily Pop. She is a fashion enthusiast and runs her own fashion and lifestyle blog thecattwalk.com.

Previously she co-hosted The Daily 10 for the E! News network before its cancellation. She is listed in the Los Angeles Times as the top 10 up-and-coming broadcasters in entertainment.

She has also demonstrated her acting skills in several movies such as Knocked Up, General Hospital, and Night Shift.

Besides the entertainment industry, she is also involved in philanthropic works as she is the International Spokesperson for the Women Like Us Foundation and President of Women Like Us Hollywood which empowers at-risk school girls in inner-city L.A.

Cait was born on 24 August 1974 and was raised along with three brothers and two sisters. She is an Indiana University graduate, who earned her graduation with a degree in journalism.

Before finishing college she started her career with Fox-affiliated WXIN, as she was hired to host the weekly segment, Youth Matters on the channel.

She got her first broadcasting job as an entertainment reporter at KBWB/KNTV in 1997. She hosted a nightly lifestyle program The Bay Beat which led her to travel frequently from L.A. to New York and vice versa to conduct celebrity interviews.

In 2001, she hosted the longest-running lottery game show Hoosier’s Lottery’s Hoosier Millionaire show for WXIN. Later in the year 2003-2004, she served as an official emcee for the NBA’s Indiana Pacers.

She later joined the entertainment channel, E! in 2006 and worked as a host for the show, The Daily 10. She joined E! News in 2010 and co-anchored the entertainment show alongside Ryan Seacrest and Giuliana Rancic. In May 2017 she became the co-host of another show, Daily Pop in the network. She left E! News in December 2017 after she learned that her co-host Jason Kennedy was earning “double” her salary.

Over her broadcasting and television career, she has worked for renowned networks and definitely has collected a fortune for living.

She used to receive a salary of around $600,000 while she was on E! News which contributed to her impressive net worth of $3 million.

Dissimilar to the career, Catt has faced multiple failures on her personal front. She was first married to fashion executive Kyle Boyd. The pair, who were college mates, tied the wedding knot in 2001.

They shared two children from the relationship; Austin, born in 2001, and Arion, born in 2005. But the couple didn’t last forever and despite having a family with children after seven years of marriage, she got divorced from her husband, Kyle in 2008. The reason behind the divorce wasn’t specified.

Despite a failed relationship, her quest for love didn’t end there after all.

Catt met Brett Jacobson, the owner of HER energy drink in a flight after attending a Memorial Day at the Indianapolis 500 in 2009. The duo eventually started dating and got engaged in October that year.

In an interview with E! News (2009) she shared her gushed about her relationship with her husband:

But forever was rather short for the couple and sadly he wasn’t the one for her at all. The couple ended their engagement just a week later. Catt took Twitter to reveal their decision to call off their engagement on 17 October 2009.

After two failed relationships, Catt still sought to find love which she couldn’t find with her previous husbands. That search for love led her to Rhys David Thomas!

In 2010, she started dating the 40 years old film producer after meeting at a charity event in Los Angeles.

But it looks like it takes Catt a short period of time to fall head over heels in love with someone. After dating for a year the couple soon got married on 23 October 2011 in a private ceremony at the Palazzo Hotel in Las Vegas soon her past resurfaced once again and she separated from her third husband as well.

After five years of their wedding, Catt filed for divorce against her husband Rhys in March 2016. The divorce was finalized in May 2017, and the former couple is still good friends.

Who is Catt Sadler’s Boyfriend Now?

The three broken relationships with her husbands have not created an ordeal in her dating life as she is in a relationship with an interior designer boyfriend, Nick LaKind.

Catt opened about the relationship with Nick through her blog site, The Catwalk on the occasion of the new year 2018. On her blog, she stated that she has a new best friend who makes her laugh every single day.

Talking about her boyfriend, she said that he lights up her life and is also sober. She further added that his commitment to healthy living astonishes her.

The couple has been together since August 2017 as they were pictured together attending a wedding in Nick’s Instagram post.

Though the couple has been enjoying the endearing moments together Catt doesn’t share a glimpse of their relationship on her social sites often.

After three failed relationship we hope that Catt finds forever with Nick and end up in a happily ever after!