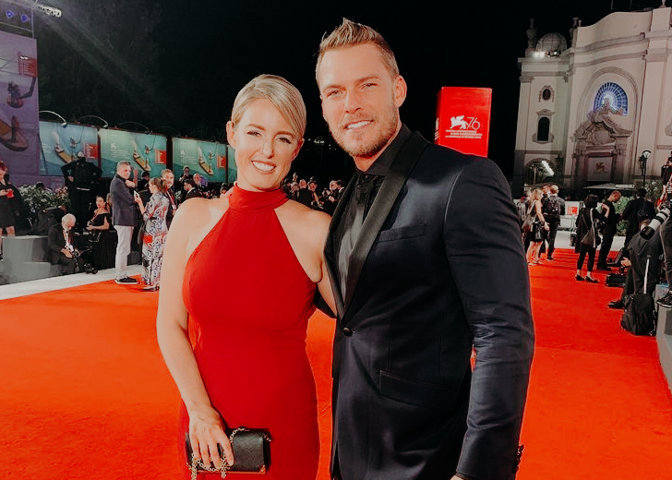 Alan tried out for American Idol in 2004, however, he was only able to get as far as Hollywood.

Nevertheless, it appears that Alan always had a desire to succeed in Hollywood because, following his aborted effort at the singing competition, he portrayed Arthur Curry in the CW’s show Smallville.

He continued to make regular appearances in films and television after that. These days, he has been in Teenage Mutant Ninja Turtles, Blood Drive on Syfy, The Hunger Games: Catching Fire, and the comedy series Blue Mountain State on Spike TV.

He frequently appears in Titans on DC Universe/HBO Max.

The actor also recently landed the coveted role of Jack Reacher in the well-known TV series of the same name on Amazon.

But unlike Alan, Catherine, his wife, desires to remain hidden. Together with her husband, they own a production firm named AllyCat Entertainment. She is a producer and writer. Here are Catherine’s five interesting facts.

Alan and Catherine have three boys. Salem Ritchson, their first son, was born in 2012, and Edan Ritchson, their second, was born at the beginning of 2014. The couple welcomed son Amory Tristan, their third child, on December 6 of the following year.

The couple frequently shares photos of their children on Instagram, and after the birth of their third boy, the pleased parents shared that their baby’s name signified “brave and powerful” on the social media platform.

The couple wed in 2006, and on May 13 of this year—their 15th wedding anniversary—Alan posted a lengthy and sentimental tribute to Catherine on his Instagram account.

The Hunger Games star detailed their history and everything, including the highs and lows they had together, in the caption and promised to stick by one other no matter what happens in life.

Catherine’s struggle with sobriety was undoubtedly one of the lows Alan was alluding to. On Instagram, Catherine has never been afraid to discuss her issues with drinking.

The producer posted a story on Instagram on September 29, 2019, detailing her path to a year of sobriety. She also gave advice to those who were thinking about giving up booze in the lengthy description, telling them to ignore cultural norms and just do it.

Catherine and her husband are committed to abstaining from alcohol and maintaining a healthy, fit lifestyle. His and her dumbbells that Catherine posted on Instagram are proof that the pair exercises out together.

Alan, who has a stunning figure, stated on Instagram that working hard was the secret to getting fit.

5. Giving Back to the Community

Also, excellent role models are Catherina and Alan. The two are representatives of the Heart and Armor group.

On their website, the group states that they “want to connect civilians to the experience of military service and to preserve the health of veterans.”